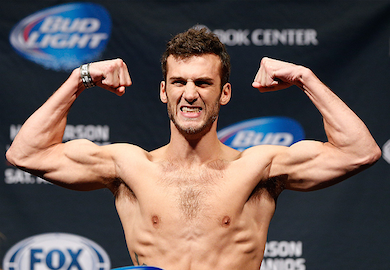 Matt Hobar just picked up his first victory inside the octagon after tonight’s bout against Aaron Phillips.

Hobar landed a takedown and was able to spend the remainder of the round (four minutes) on top. Phillips, however, worked as much as possible off his back by going for multiple submissions and landing four stiff up-kicks. With the way judges award fighters with top-posiiton, it would have been surprising to see Phillips land a winning scorecard in the first round.

Hobar went back to grappling for victory in the second and third rounds. Hobar had no issues at all repeatedly planting Phillips on his back. Even though Phillips made it back to his feet almost every time he was plopped on the ground, Hobar would one-up him by taking him right back down. Phillips fought hard, but Hobar was able to utilize his size and weight to keep Phillips on the mat.