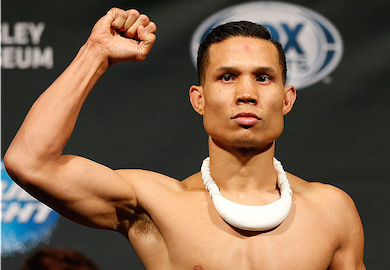 Jon Tuck was impressive in his performance tonight, considering he let Jake Lindsey dictate where the fight went. Lindsey often tried to force Tuck against the fence so he could work for a takedown, but Tuck did a fantastic job at picking Lindsey apart with jabs and a few powershots. There was a point at the beginning of the fight where Tuck cracked Lindsey with two consecutive overhand rights and the crowd roared in approval. Luckily for Lindsey, he was able to stay standing and recover.

Even though it was Lindsey who was looking for takedowns, Tuck would often end up on top after their close encounters. Once they were on the ground Tuck was not able to accomplish anything and Lindsey would get back up to his feet shortly thereafter.

Tuck took Lindsey down seconds into the third round and finally established some dominance on the ground. Tuck quickly transitioned from half-guard to side control and then a scramble ensued for positioning. Tuck came out on top and before Lindsey knew it, Tuck had his back. Tuck worked for the rear naked choke, but he was never able to lock it in. Lindsey was working to spin out of danger and he exposed his ribcage.

Tuck lifted his heel and slammed it into the lower-ribs of Lindsey. Lindsey squinted and proceeded to tap out due to the pain. It was an unconventional way to win from the back, but Jon Tuck got it done.

Jon Tuck def. Jake Lindsey by way of TKO (Tapout from Strikes) 2:47 of Round 3