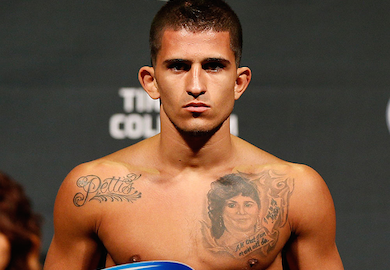 The fans are used to more exciting performances from the Pettis Family, but tonight was still impressive for Sergio Pettis. He was able to take minimal punishment while landing what he needed to win. It may not have been the most exciting victory, but it was very strategic.

Even though the first round did not see much action, watching both Meza and Pettis trying to find a comfortable striking distance was interesting. Meza was just out of reach of all of Pettis’ unorthodox strikes and Pettis dodged most of Meza’s punches.

The crowd turned on the fighters in the second round where the feeling-out process continued. Pettis’ offense evolved around attacking the lead leg of Meza which restricted his ability to shoot for a takedown. It may not have been the flashy offense the UFC die-hards are used to seeing from Duke Rufus’ fighters, but it was effective nonetheless.

Sergio Pettis landed a glancing high kick that caused Meza to stumble around a bit, but Pettis was unable to lock up the victory and the fight made its way into the third round.

The lengthy feeling out process may not have been exciting for the fans, but it surely paid off for Sergio Pettis in round three. He found a comfortable range to strike from where he did not have to worry about any form of offense Meza was throwing at him.

After fifteen minutes of fighting, Pettis was awarded the decision win.