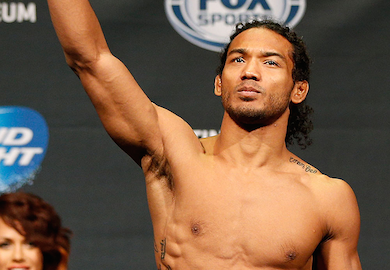 Rustam Khabilov and Ben Henderson headlined tonight’s card on Fox Sports 1 with their strategic lightweight bout. Henderson walked into this fight ranked at #2 while Khabilov was ranked #11.

Rustam Khabilov did a fantastic job in the first round for someone who is not even in the top ten. He outworked the former UFC Lightweight Champion and took him down multiple times. If he failed his first attempt, he would follow up quickly with another attempt to make sure Henderson’s back would meet the mat. Despite being taken down repetitively, Henderson’s gas tank did not seem drained and he did a great job in rebounding throughout round two.

Henderson controlled where the fight went in the second round and even landed a takedown of his own. Not a lot of action took place in the second round, but Henderson’s ability to control the middle of the cage likely gave him the go-ahead with the judges.

Khabilov returned to his aggressive ways of grappling in round three when he landed takedowns at will. Henderson was prepared for these takedown attempts as he was starting to transition out of them before his back even hit the ground! There was a turning point in the round where Khabilov landed a takedown but Henderson executed a beautiful sit-out sweep and forced Khabilov to carry his weight for the remainder of the round.

You could tell these two men were on different levels of conditioning by the way they were breathing at the start of round four. You could tell this was the first time Khabilov reached championship rounds in the UFC.

Henderson claimed the center of the octagon in round four after finding great success with it in the second. He was able to control where the fight went and backed Khabilov up against the cage. He lunged at him with a swift uppercut and dropped him. He leaped on the back of Khabilov and cranked the rear naked choke. Khabilov had no other choice but to submit and the referee called for the fight to stop.

Ben Henderson def. Rustam Khabilov by way of Submission (RNC) 1:16 of Round 4