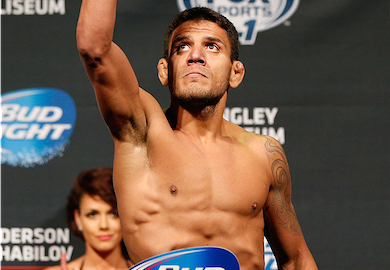 Despite his opponent being a BJJ Champion, Jason High took the fight to the ground early and implemented his ground-and-pound game. Every time Dos Anjos would try to set up a submission, High postured up and moved out of the way just in time. Once they returned to their feet, you could see High was fatigued.

Dos Anjos began to attack the body at the end of the first round and at the start of the second. Even though High was exhausted, he continued to press forward and work for a takedown. He was clearly too tired to land a knockout so he tried to rely on his wrestling to lock up a win. Dos Anjos, however, had enough power in his punches to send High to the ground.

Dos Anjos landed a huge left straight and High fell to the ground. Dos Anjos jumped on him and landed a handful of unanswered strikes which forced the referee to put a stop to the fight.