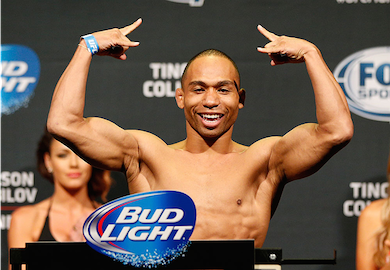 John Dodson walked into the octagon tonight as a heavy favorite, and his performance proved the bookies right. Dodson is one of the best athletes in mixed martial arts today and showcased his skills well against John Moraga.

Dodson’s speed in unparallelled. It is a fact smaller fighters tend to move faster, but he even as a leg up on those within his division. He was able to come within striking distance of Moraga, land a combo and back up before Moraga could even think to answer.

Even though Moraga took the center of the octagon, Dodson still dictated where the fight went. He did this constantly feigning strikes, keeping Moraga on his toes and stopping him in his tracks. Whenever Dodson charged forward, Moraga stalled too long and his only form of defense was to backpedal and surrender any positioning he once had.

In one of these instances, Dodson went for a high kick and cracked Moraga’s nose with his knee. Moraga started to bleed out of his nose and Dodson went in for the kill. He could not get the job done and Moraga showed great determination to see the third round.

In between the second and third round, Moraga got his nose looked at by the doctor. At first, the doctor cleared him and said he was good to fight. However, upon a second look the doctor waved it off.

John Dodson def. John Moraga by way of TKO (Doctor Stoppage) 5:00 of Round 2