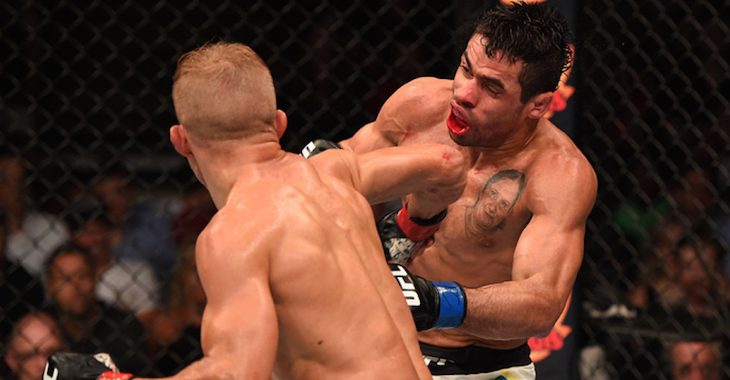 The UFC bantamweight champion TJ Dillashaw picked up right where he left off, picking Renan Barao apart on the feet and eventually finishing him in the fourth round with a barrage of punches.

The MMA world reacted and let their opinions be known on social media!

Looks like Barao is fighting like a guy talking to a girl he knows is out of his league. Speaking for my friends, I'd never had that problem

Can't help but feel sorry for Barao, still on his feet & contesting the stoppage, but that was an awesome finish by the champ #UFCChicago

That's how it's done! @TJDillashaw

Not 1 time was I convinced Barao even wanted to be in this fight tonight His demeanor weak he just looked lost from jumpstreet! #UFConFOX16

The best footwork I've seen in the ufc @TJDillashaw

Great performance by the champ @TJDillashaw always staying one step ahead! @ufc

Still saying "damn". That was a ridiculous fight by Dillashaw! #UFCChicago

I love my team, I love see my brothers do well and I'm thankful that I get to be a part of it. @TeamAlphaMale

What bantamweight wants to challenge Dillashw next for the belt. *smacks everyone* "put y'all hands down before someone gets hurt! #UFC😂

That boy @TJDillashaw put in that work tonight.

When can we see Dillashaw vs Cruz plz?! Dillashaw looked like a killer tonight.