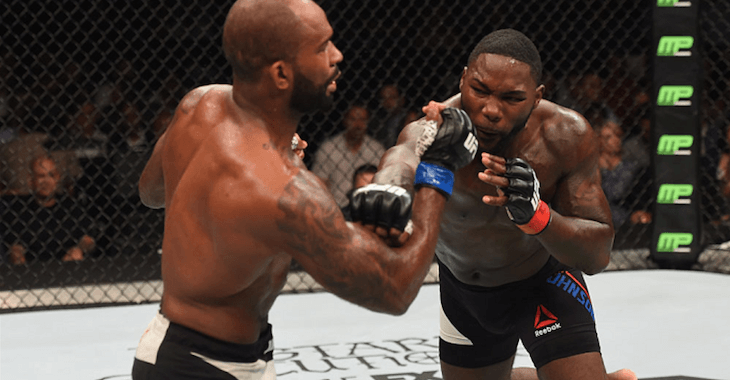 UFC 191 didn’t see a ton of finishes, especially in the striking department, but we did have Anthony Johnson vs. Jimi Manuwa.

In the first round of the light heavyweight fight Johnson and Manuwa exchanged on their feet, then Johnson changed things up and went for a takedown. He go it and put Manuwa on his back for a little while.

In the second round it only took 28 seconds for Rumble to connect with a big right hand that sent Manuwa down to the mat. He tried to follow up with some shots on the ground before the referee stepped in and put a stop to the bout.

It was an important win for Johnson, coming off of a loss to Daniel Cormier in a fight for the title.

Check out what other UFC fighters had to say about the exciting finish!

Manuwa is a massive LHW. Made AJ look small at weigh ins. Stoked for this fight. #UFC191

Someone is gonna get flattened in this fight! #UFC191

Rumble fighting at 170-lbs. seems like a dream I can barely remember. That happened, right? #UFC191

Tough first round for @POSTERBOYJM but time to take over now. Survived the initial storm,