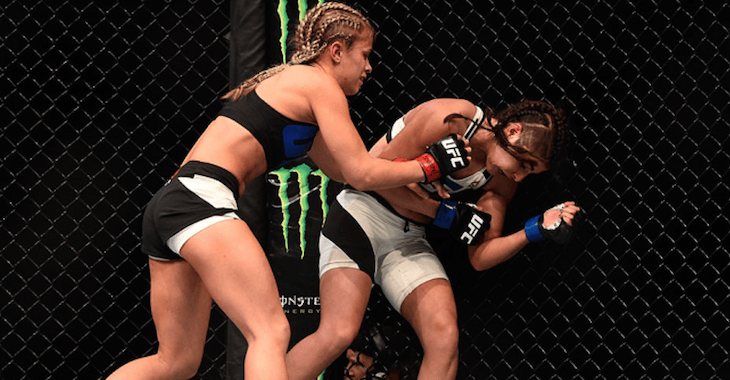 UFC strawweight Paige VanZant is only 21 years old and is already being coined as the next big thing. Her dominating win over Alex Chambers at UFC 191 certainly didn’t do much to quiet the hype, it just made it louder.

VanZant went in as the giant favorite and delivered, beating Chambers up with her frantic pace and striking. Eventually, in the third and final round, VanZant was able to lock in a super quick armbar and forced Chambers, who was thought to have an advantage on the ground, to tap.

VanZant is now 3-0 in the UFC and 6-1 overall. It would probably make sense for the UFC to give her some more fights before trying to throw her in with Joanna ‘Champion’, but I guess we’ll have to wait and see.

Check out what other UFC fighters had to say about the fight and the finish:

My prediction for this fight is PVZ via frenzy gnp TKO – bad early stoppage at about 106 seconds into rd 1. #UFC191

"Oldest fighter on the card" not cool guys @ufc #UFC191

Van Zant got a little Rousey with the armbar #UFC191

Thank God that's over cuz it sucked so bad! Alex was just in there to be punch bag and lose! #UFC191