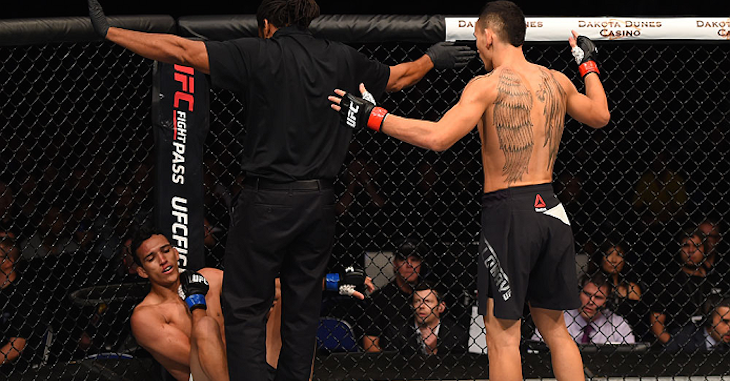 Charles Oliveira’s night ended early when he suffered a freak injury in the octagon during his main-event bout with “Blessed” Max Holloway. While nothing is official, it looked as if Oliveira damaged his shoulder during or after his takedown attempt of Holloway. Holloway fought off a takedown attempt and demanded the fight remain standing, forcing Oliveira to get back to his feet. When Oliveira stood straight up, he clutched his shoulder and backed up and essentially forfeited the match by sitting in the corner of the cage.

Check out how UFC fighters reacted to the turn of events on social media!

I believe Oliveira hurt his neck when he went head first into the cage. #UFCSaskatoon

Well I believe that will be a rematch

Wtf son! -____- #UFCSaskatoon damnnnn man. That was heating up thi

Damn that sucked I know Hollaway didn't wanna win like that

Would you like to see a rematch, or is Holloway ready for some the caliber of Frankie Edgar? Share your thoughts in the comment section below!