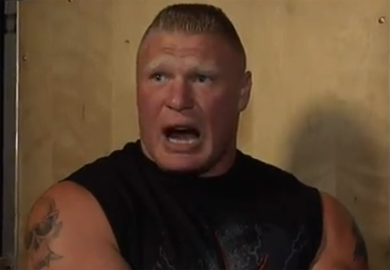 Former UFC heavyweight champion and pro-wrestling superstar Brock Lesnar is back in the public consciousness this week, and the Ultimate Fighting Championship organization’s digital subscription service UFC FIGHT PASS is premiering a retrospective on the 280-pound beast’s unique legacy as a mixed martial arts fighter.

Available immediately on UFC FIGHT PASS, “The Best of the Beast” anthology features all seven of Lesnar’s UFC fights, archive material including footage of Lesnar’s amateur wrestling career and – in addition – exclusive interviews with pro-wrestling stars “Stone Cold” Steve Austin, Dwayne “The Rock” Johnson and Jim Ross, each of whom discuss Lesnar’s journey from pro-wrestling to the UFC Octagon®.

Wrestling Hall of Fame announcer Jim Ross was the man who scouted and eventually signed NCAA freestyle wrestling heavyweight champion Lesnar to a seven-figure pro-wrestling contract. Offering a unique perspective on Lesnar’s time in the UFC, Ross said: “Brock is a once in a generation athlete, he could have excelled in any number of sports that he turned his attention to. But – and he won’t mind me saying this one bit – he has a nasty streak in him. So I always suspected he’d do well when he went to the UFC. That said, I think what he accomplished as a MMA fighter, with little training and in such a short amount of time, was something very special.”

Wrestling superstar and Hollywood action hero Johnson, who has performed in the ring with Lesnar, said: “Giving Brock Lesnar a shot in the UFC after just one win in MMA was a risk for the UFC. And they threw everything at him – Frank Mir in his first fight. But what Brock managed accomplish in such a short amount of time was historic and I’m not sure if it will happen again.”

Steve Austin, action movie hero, podcaster and the iconic star of pro-wrestling’s biggest boom period, said: “I’m a huge UFC fan and, from a fan’s perspective, Brock brought a lot of excitement to the UFC’s heavyweight division. Brock’s also a friend of mine, so I’m biased, but I think that if fans really look at what he accomplished in a short amount of time, they will see he’s as good as anyone in the history of the heavyweight division.”

Entering the Octagon for the first time as a 1-0 novice in February 2008, Lesnar competed in the UFC until December 2011. In that time, he defeated UFC Hall of Famer Randy Couture, two-time UFC champion Frank Mir, and respected veteran Heath Herring, and overcame near-impossible odds to submit the previously unbeaten Shane Carwin. He retired from competition following back-to-back first round defeats to reigned UFC champ Cain Velasquez and No.6 ranked contender Alistair Overeem.

UFC FIGHT PASS Chief Content Officer Marshall Zelaznik said: “Brock Lesnar looms large in the annuals of the UFC and we’re excited to present our subscribers with the chance to relive his incredible career in the Octagon on UFC FIGHT PASS.”