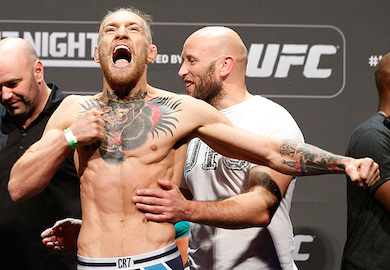 Conor McGregor said he would finish Diego Brandao in the first round and he lived up to his word in tonight’s main-event.

The fight kicked off with both fighters oozing confidence. McGregor threw a few spinning back heel kicks while Brandao stood close to McGregor, willing to bang it out. When the fight went to the mat, McGregor almost walked into a couple heel hooks but he was able to escape with the aid of some fence grabbing. Brandao’s leg lock attempts were not that deep, so it is up for debate whether or not the fence grabbing saved McGregor. It was clear who had the advantage on the ground, though, and McGregor opted to bring the fight back to the feet.

McGregor backed Brandao up against the fence and caught him with a heavy right hook/left cross combination. Brandao was wobbly and walked along the fence to get away from McGregor. McGregor kept his composure and picked his shots and made every single one count. He made Brandao double over with a hook to the body and he followed it up with a brutal left hook that sent Brandao to one knee.

McGregor followed him to the ground and unloaded with shot after shot to the point where Brandao could do nothing but turtle up. The referee gave Brandao a long time to recover and fight back, but it never happened. The referee waved off the fight and McGregor basked in the glory in front of his home country.

In the post-fight interview, McGregor stated he wants “football stadiums and championships”.

Conor McGregor def. Diego Brandao by way of TKO (Strikes) 4:05 of Round 1