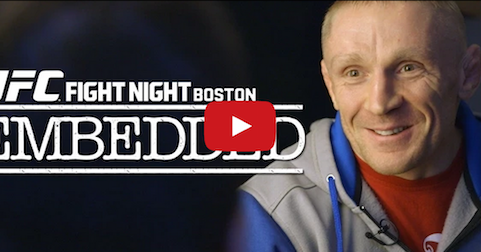 On episode #3, main event star Dennis Siver does media and breaks down the animosity between him and his Irish opponent Conor McGregor. In the gym, McGregor works his striking; local welterweight John Howard combines standup with soundbytes; and former lightweight champion Benson Henderson gets in some jiu-jitsu at Kenny Florian’s training center. UFC lightweight Donald “Cowboy” Cerrone and his camp struggle with baggage as they arrive in the wintry Northeast. UFC Embedded is an all-access, behind-the-scenes video blog series focusing on the days leading up to the hotly-anticipated UFC Fight Night: McGregor vs. Siver, taking place Sunday, January 18 on FOX SPORTS 1 and more.