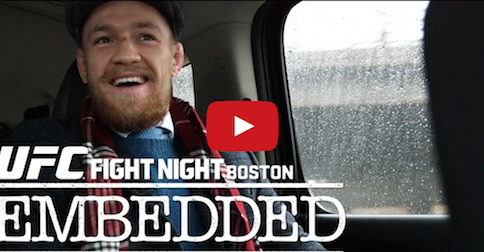 On episode #1 of Embedded building up to UFC Fight Night, the two European headliners brave the Boston cold as fight week begins, with Irish featherweight Conor McGregor making a day trip to appear on SportsCenter on ESPN. Back in Beantown, McGregor rewards autograph entrepreneurs, then rewrites some promo scripts on the fly to inject his own unique personality. German Dennis Siver also lands, enjoying a dinner with his cornerman while doing some private trash talking of his opponent. McGregor continues to instigate on a bigger stage during media duties. UFC Embedded is an all-access, behind-the-scenes video blog series focusing on the days leading up to the hotly-anticipated UFC Fight Night: McGregor vs. Siver, taking place Sunday, January 18 on FOX SPORTS 1 and more.