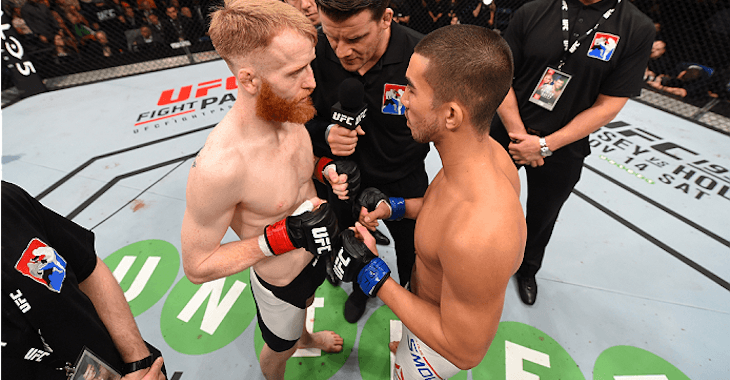 Ultimate Fighting Championship returned to Ireland this past weekend with what was expected to be a stacked card with “UFC Fight Night 76”. “Irish” Joe Duffy and Dustin Poirier’s main event scrap was pulled from the card due to an injury Duffy suffered just days before the fight and Stipe Miocic’s heavyweight bout with Ben Rothwell was canceled as well.

While the fans expected the card to suffer greatly due to the injuries, the fighters who remained on the card put on an amazing show for those who tuned in on UFC Fight Pass. Louis Smolka’s win over Paddy Holohan may have upset the fans in attendance, but it was a fantastic way to wrap up an afternoon card for those stateside.

Preliminary fighters Darren Elkins, Cathal Pendred, and main carder Norman Parke topped the Reebok payout report which totaled out at $62,500. The payout would have been MUCH higher had four fighters not been forced off the pay per view.

Fans and fighters alike were not thrilled when the UFC revealed their method of how they will be paying the fighters with Reebok’s sponsorship money. Fighters less than six octagon appearances to their name will only make $2,500. 6-10 fights in the UFC will get you $5,000. For 11-15 octagon appearances, fighters will make $10,000 and an extra $5,000 for 16-20 fights. Long-time UFC fighters with more than 20 fights will receive $20,000.

Of course, the fighters above have the option to sign sponsors they can represent outside of the octagon. What do you think of “UFC Fight Night 76’s” payouts? Share your thoughts in the comment section below!