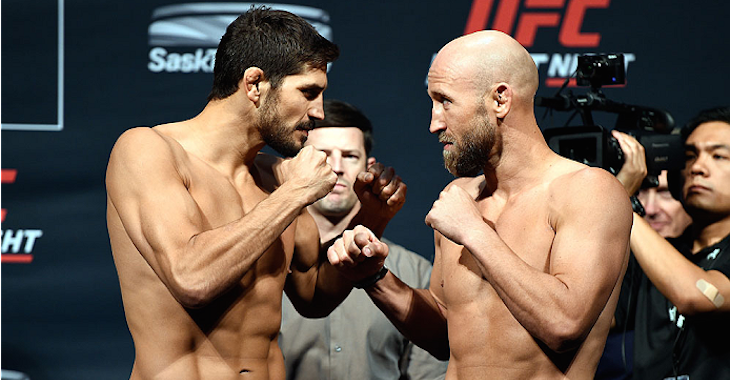 “UFC Fight Night 74” is in the books and Max Holloway has added ANOTHER win to his already impressive streak. Patrick Cote and Josh Burkman brought the crowd to their feet with their fight of the night performance and both earned an extra check because of it. Check out the full bonus report below!

Fight of the Night: Patrick Cote vs. Josh Burkman
Patrick Cote and Josh Burkman brought the crowd in Canada to their feet with their unbelievable performance at “UFC Fight Night 74”. Compared to the preceding fights on the main card, (with the exception of Trinaldo’s TKO) Cote/Burkman looked like a fight of the year candidate! They exchanged blows from the opening horn and didn’t stop until Burkman was on his back with Cote postured over him, waiting for the referee to pull him off. That’s not to say Burkman didn’t impress, though; He landed some amazing shots in the second round and showcased his superior grappling skills. When it was all said and done, though, both men are $50,000 richer and have something to be proud of.

Performance of the Night: Frankie Perez
Speaking of something to be proud of, Frankie Perez chose to call it quits after his first and only win in the octagon. He knocked out veteran Sam Stout in less than a minute and retired during his post fight speech, stating that he doesn’t want to put his body in harm’s way so he could support for his family. Perez would be welcomed back into the octagon with open arms at anytime, one would assume.

Performance of the Night: Felipe Arantes
Felipe Arantes steped his game up tonight when he went toe-to-toe with thirty-fight veteran Yves Jabouin. Jabouin looked to be in control with his top control grappling, but in reality Arantes was simply waiting for an opportunity to present itself. Arantes ultimately trapped Jabouin in an armbar that forced him to submit with less than a minute remaining in the fight. This was his fourth octagon win.