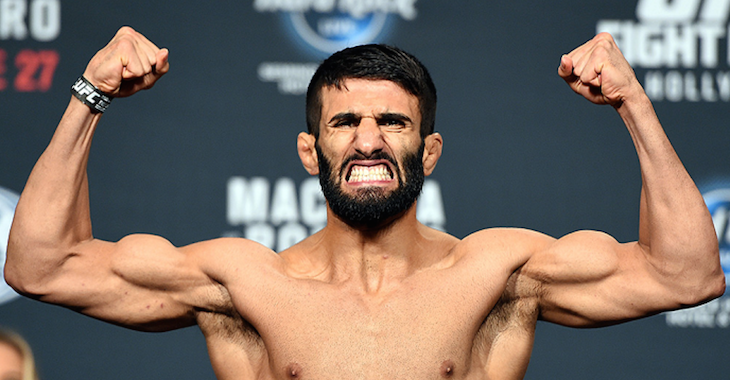 The first fight of the night featured the bantamweights, as Siwan Kakai took on Danny Martinez.

Martinez came out and started throwing right away. He was the aggressor from the start, backing Kakai up and coming in with big punches. Kakai managed to land a few nice jabs. Kakai shot in for a takedown and got Martinez down. Against the cage, Martinez managed to get to his feet, with Kakai still holding on to him, looking for another takedown. Martinez circled away and got free. He went back to striking right away. Kakai landed a nice combo. Martinez kept coming forward, then he got dropped with a big knee. Kakai tried to swarm and get the finish but Martinez got to his feet and survived. Kakai kept the pressure on and landed several more big knees and elbows. During the high pressure striking Martinez grabbed ahold of Kakai and tried for a guillotine, but lost it after a while. They went back to striking. Martinez started landing towards the end of the round. In the clinch Martinez landed a few big elbows of his own before the first round ended.

In the second Martinez came out a little more composed. He still threw big punches, but slowed things down a little bit. Kakai looked like he was trying to counter Martinez’s big punches. Martinez came in with massive body punches that landed. Kakai went for another takedown and got it. Martinez got to his feet and landed a big knee to the body of Kakai, then Kakai returned with a big knee of his own. Kakai got Martinez down again. Kakai tried to work to the back but Martinez kept his back on the cage and defended well. Martinez stood up after a while and broke away from the clinch. He went to work throwing big punches and telling Kakai to bring it. Martinez went for a big flying knee that was blocked.

Martinez, probably knowing he was down, came out and moved forward. Martinez wanted to stand and bang with Kakai, but Kakai used good movement and countered. Kakai eventually got another takedown in the third and immediately tried to work to the back. With a minute left Martinez managed to get to his feet. Kakai landed a huge knee, but Martinez shrugged it off and kept swinging. The two went at it for the last twenty seconds.