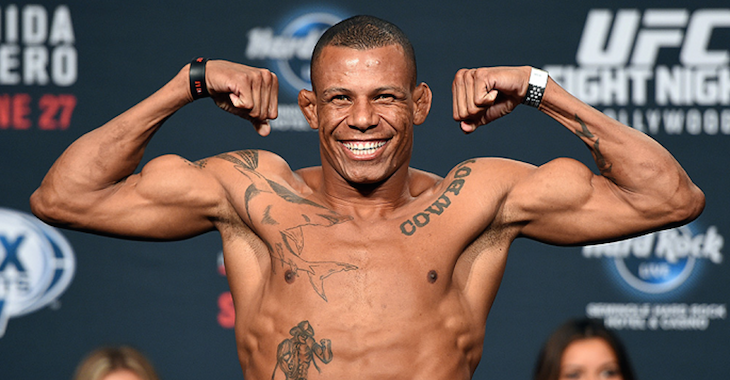 Exciting Alex Oliveira took on fellow welterweight Joe Merritt in the featured prelim of the evening.

Merritt came forward right away. He tried to land punches but Oliveira wrapped him up and pushed him to the cage. From there he worked for a takedown. Merritt did a good job defending. Oliveira was unable to get the takedown and Merritt was unable to move away, but did defend well. Eventually Merritt reversed for a short time, but Oliveira reversed him, picked him up and slammed him down.

Right away Oliveira went to the back and went for a rear-nakes choke. Oliveira locked in the body triangle with his legs. Merritt did his best to defend, but the body triangle made it hard for him to get free. He eventually worked his body around and turned to face Oliveira in his guard. From full guard Merritt landed several big elbows. In the final seconds both fighters stood up and threw bombs.

In the second round Oliveira came in with a big elbow, but got caught with a counter from Merritt. Oliveira got a little wild and started chasing Merritt, he tried a leg kick but fell down. Eventually Oliveira got the takedown, but Merritt got the reverse again, and wound up in full guard of Oliveira. Merritt landed big elbows as Oliveira tried to get up. Then when Oliveira did get to his feet he ate a big knee from Merritt. Oliveira got the advantage on the cage and went to work for a takedown. He got Merritt down and went to the back right away. Merritt stood up and had Oliveira on his back. It looked bad for Merritt, but he moved down to the mat and worked on defending the choke. Merritt got out again and moved to full guard, but got caught in a triangle. Merritt stood up and slammed Oliveira down, getting free from the choke before the round ended.

In the third Oliveira went forward with big bombs. Oliveira came in with an uppercut, then clinched Merritt on the cage and went for a takedown. They stayed in that clinch for a while. Oliveira pulled, but Merritt fell into mount position. Oliveira escaped quickly and got to his feet. Oliveira again got Merritt on the cage, then he picked him up and slammed him down. Oliveira again tried to work to the back of Merritt. Merritt got to his feet, but Oliveira was all over him and got him down again. Working from the back Oliveira went for another RNC. They stayed in that position until the end.