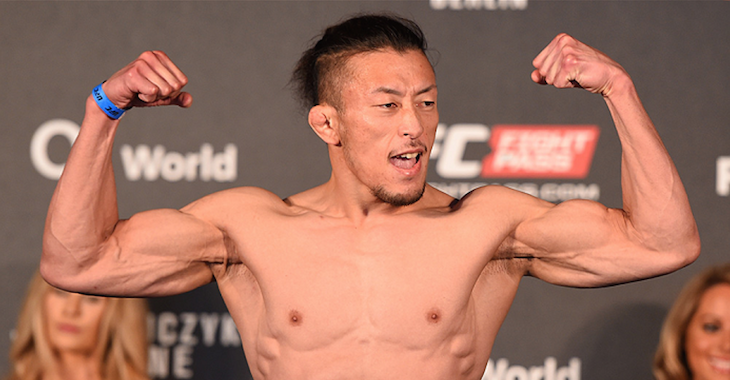 In the co-main event Tatsuya Kawajiri took on Dennis Siver.

Right away Kawajiri came out with some crazy kicks. None of them really landed. Siver went for a leg kick, almost got caught with a spinning back fist. Kawajiri went in for a takedown, pushed Siver to the fence. He tried to life up but Siver kept his balance and broke away. Siver landed nice leg kick, then body kick. Siver caught him with a big punch but Kawajiri looked unfazed. Kawajiri looked for the takedown again but failed. Kawajiri kept throwing the jumping switch kick. Siver landed a spinning body kick. Kawajiri again went for a single leg takedown, but Siver’s defense again worked. Kawajiri threw a combo then shot in again. Siver kept balance on one leg and threatened with a guillotine. Kawajiri quickly shoved him off and got the takedown before the round ended.

Kawajiri came in and threw a kick but ate one to the groin. He brushed it off and kept going. Siver threw another back kick that almost landed perfectly. Siver landed a nice leg kick. Kawajiri kept going for the takedown, he eventually got one. Kawajiri worked to half guard, then to mount. Siver got out and scrambled but he found himself back on the bottom with Kawajiri in his guard.

In the third Kawajiri threw a spinning backfist that landed. Then he went for the takedown and got it. Siver went for the guillotine but let it go and both fighters got back to their feet. During an exchange and scramble Siver almost ended up on the back of Kawajiri, but was unable to. Kawajiri went for the takedown again and eventually got it. Siver again locked in a guillotine on the bottom and it looked tight but Kawajiri passed guard and got free. Kawajiri started landing hard elbows from the guard, then the fight ended.