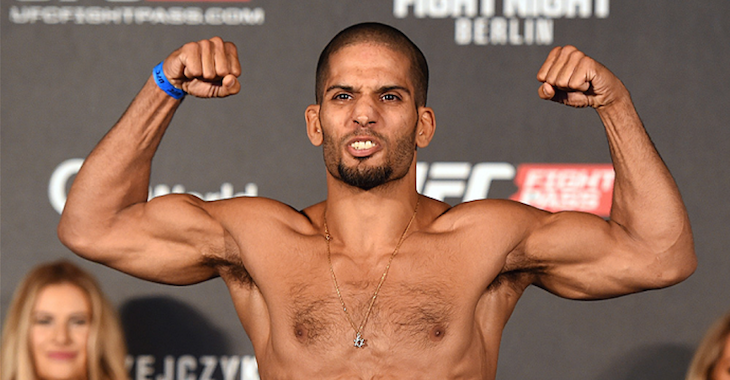 The featherweights entered the octagon when Niklas Backstrom took on Noad Lahat.

The fight started slow, both fighters were patient. Backstrom tried to go in for a knee but got taken down by Lahat. Lahat, from the full guard, tried to moved into half guard but got reversed. Backstrom moved quick and worked to the back of Lahat. Lahat, is a Brazilian Jiu-Jitsu back belt, but it looked like Backstrom might get it in. He had a loose body triangle locked in. In a scramble Backstrom moved to an armbar and worked on it for the last 15 seconds of the round.

In the second Lahat came out and landed a nice leg kick. Lahat started throwing bombs and landed a few. He moved in striking, then Backstrom grabbed him and clinched briefly. They separated, then Backstrom shot in for a takedown. Lahat threatened with a choke so Backstrom let go. Backstrom grabbed the thai clinch but ate a ton of big uppercuts from Lahat. Backstrom looked weary as Lahat continued to unload big shots. Backstrom shot in for a takedown and Lahat rolled him and got top position, mount. Lahat moved up and started to unload elbows and punches. Then he went for an armbar. Backstrom got out but Lahat remained on top position. He was in half guard, then moved to mount again. Backstrom threatened with a heel hook, Lahat rolled and stood up. He stood over Backtrom and landed leg kick until the round ended.

In the third Lahat continued to pressure and landed more big punches in the clinch. Lahat went for a throw but  Backstrom revered and ended up on top briefly, before they both go to their feet. Backstrom moved in and got a takedown against the cage. Lahat used his legs and rolled out of bottom position into top mount, but then Backstrom used his legs to get out of the mount. They both stood up. The fight went back to the ground, but only briefly, before they stood up and Backstrom shot in for another takedown. He got it and stayed there until the fight ended. Close fight.