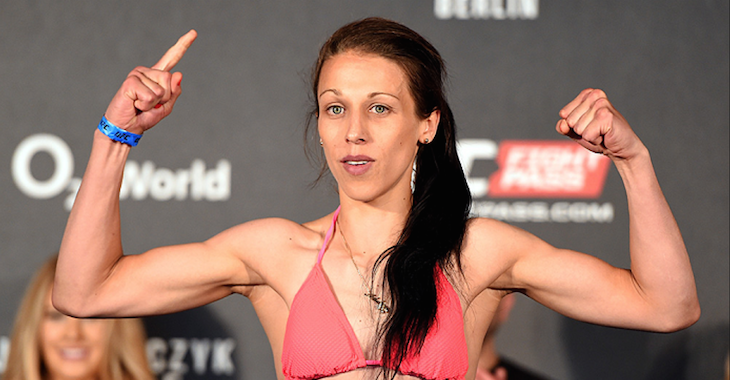 The main event for the UFC strawweight title just went down between Joanna Jedrzejczyk and Jessica Penne.

The staredown was intense before the bell rang. Joanna came out right away and started throwing punches. Penne looked relaxed and defended well. Penne moved in for a clinch, got Joanna to the cage in the clinch. Penne tried for a throw but Joanna defended well and broke free. Joanna landed a nice jab and body punch. Penne timed a clinch-trip and go it briefly before Joanna got back to her feet. Penne clinched Joanna on the cage. Penne landed a nice knee to the body in the clinch. Joanna broke free but Penne put her on the cage in the clinch again. Joanna again got free and went back to striking. Joanna landed a massive shot that dropped Penne. Joanna rushed in and landed a some quick strikes. Penne survived the onslaught and Joanna stood up while Penne stayed on her back. Joanna wouldn’t let her up. Finally the referee stood her up. Right at the bell Penne landed a judo throw.

In the second Joanna started landing with her speedy strikes. Penne came in and Joanna landed a nice counter. Joanna landed a nice body kick, then a flurry of punches. Joanna really started to find her range. Penne came in for a clinch and Joanna cracked her with a massive elbow that sent Penne moving back, she was hurt. With her back on the cage Penne ate a furious flurry of punches from the champ. She survived but still looked hurt. Again Joanna got her on the cage and started teeing off on her. Penne’s face was busted up with blood everywhere. Joanna landed a big left that sent Penne back again. Joanna lands a big right-left combo. Thirty seconds left and Joanna started unloading on Penne. She some how survived again. The round ended. Penne was busted up bad. Her nose looked broken.

In the third Joanna started right back where she left off. Penne was really getting beat up. Penne came in and tried to land a leg kick, ended up eating one from Joanna. Joanna just picking her apart. Penne shoots in from far out and fails with the takedown. Penne grabbed Joanna when she jumped in with a knee. Penne clinched Joanna on the cage. Penne let go and broke away. Penne’s face looks horrible, bloodied and swollen everywhere. Joanna got Penne on the cage again and started unloading more punches. The referee saw enough and stopped the fight. Total destruction by the champ.