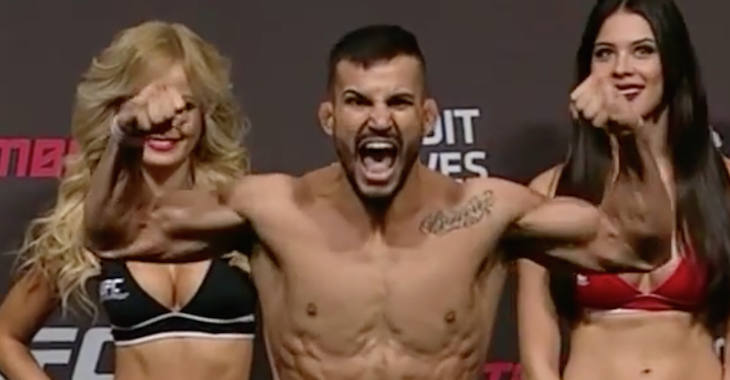 For the first fight on the FOX Sports 1 prelims we got to see the featherweights as Lucas Martins took on Mirsad Bektic.

Right away both fighters started exchanging punches. Bektic moved in and got big takedown, lifting Martins up and slamming him down. Bektic stayed busy on top, trying to advance his position while throwing elbows and punches. Bektic moves Martins against the cage and starts landing big left hands to the face of Martins. Martins’ face showed lots of damage. Martins works to get to his feet. He does and they stand in front of each other and exchange. Bektic shoots in again and gets the takedown. Martins is able to stand, but Bektic is behind him, he throws Martins back to the ground. Bektic stayed on Martins, with a smothering pace. Overtime Martins tried to get up using his legs or arms Bektic was quick to counter and keep him down. At the end of the first round Bektic looked for a rear naked choke. The round ended before he could really threaten with it.

At the start of the second Martins face looked bad. Right away Bektic lands a big right hand that drops Martins. Bektic swarms Martins and unleashes a fury of strikes. Martins covered up but didn’t do anything to move. The referee gave him chances but eventually stopped the fight.