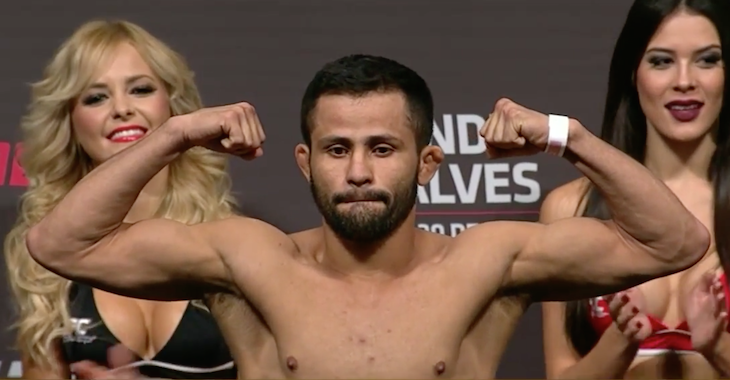 An important fight in the UFC flyweight division just went down between Wilson Reis and Jussier Formiga.

Formiga landed a nice right hand to start the fight. The fight goes to the ground but for only a moment. Both fighters moved in close and threw big shots but both missed. Formiga lands a big right hand again. A good leg kick landed from Reis. Leg kick landed again for Reis, but then eats a right hand from Formiga. They clinch, but then break away soon after. Reis moved close to clinch but Fromiga landed another nice right hand. Reis gets close again and pressures Formiga to the cage, where he looks for a takedown. The round ended before he could do anything.

Towards the start of the second Formiga lands a right hand that completely drops Reis. Formiga rushes in and looks for the finish but Reis survives and defends. Formiga gets to the back of Reis but Reis gets free and reverse to end up on top position in full guard. Reis worked to get to half guard, but Formiga gets up and to his feet. Reis pushes him on the cage but they eventually separate. Again Formiga lands a big right hand. Reis shoots in and gets a takedown but Formiga gets right back up. Reis pushes Formiga to the cage, then both fighters began reversing position. They end up on the ground, then engage in a furious scramble to get to their feet, both fighters threatening with a leg lock.

After some feints in the third round, Reis shoots in and pushes Formiga to the cage. Reis landed a few knees before Formiga pushed away and returned to the center of the octagon. Reis threw a big flying knee that looked like it landed, but Formiga didn’t react. After some slow action Reis again clinches on the cage. He threw knees to the body of Formiga. The referee separated them and they returned to he center of the octagon. Formiga landed another right hand, then landed a big trip takedown, and went right to the back with 10 seconds left in the fight.