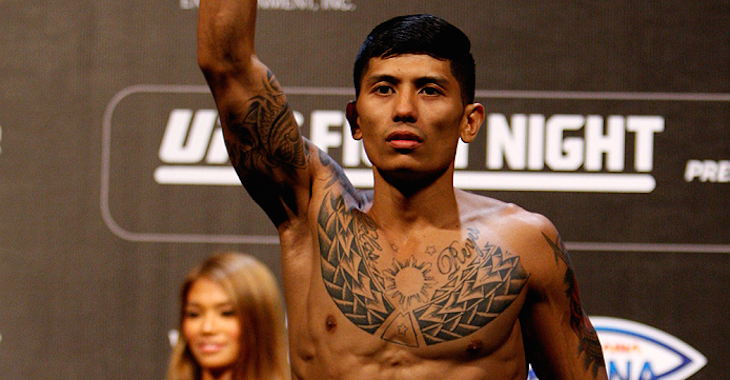 After an uneventful and controversial opening fight, the fans who attended “UFC Fight Night 66” were treated to an entertaining fight between Jon Delos Reyes and Roldan Sangcha-an. Sangcha-an tried his hardest to survive the rear naked choke he eventually ended up in in the second round, but Reyes’ grip was too tight and he was forced to tap.

Even though Reyes walked out with a big finish and his hands raised, he sported a MASSIVE cut over his right eyebrow that caused a pause in the fight. Sangcha-an was suckered into exchanges that brought the crowd to their feet in a much needed electric fight after such a slow opener.

Reyes cut was addressed by the doctor and after being allowed to continue, he made the moves to get in position for a rear naked choke. Sangcha-an looked to be trapped, but he was able to free his neck only to get trapped yet again. Reyes cranked hard and forced the tapout!

Jon Delos Reyes def. Roldan Sangcha-an by way of Submission (RNC) 3:13 of Round 2