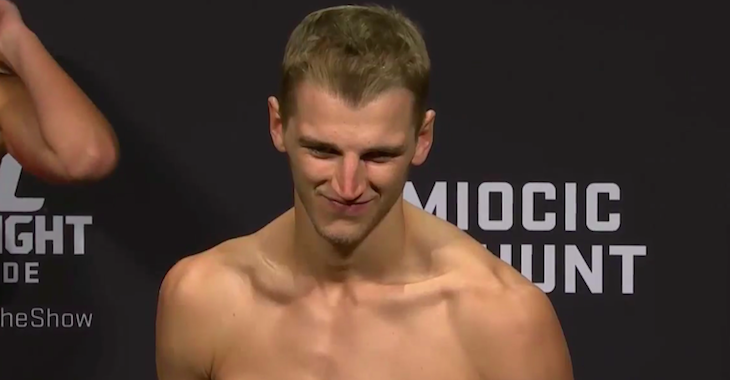 Featherweights Hatsu Hioki and Daniel Hooker went at it in the featured fight of the UFC Fight Night 65 prelims.

Hooker threw a head kick that was blocked. Hioki went in for a takedown and got it. Hioki moved quick and got to mount. Hooker pushed off the cage and reversed position. Both men stood up. Hooker lands a head kick but Hioki grabs a hold and clinches with Hooker. Close round, Hioki may have landed more.

Hooker threw another head kick in the second round, and again Hioki grabbed it. This time he used it to get a takedown. Hooker managed to get back to his feet. Hioki’s jab began to land. He went for a takedown but was unsuccessful. A little later in the round he was denied a takedown again. Hooker lands a big head kick again, this time Hioki gets wobbled and drops. Hooker rushes in and lands hard shots that put him out. Fight over.