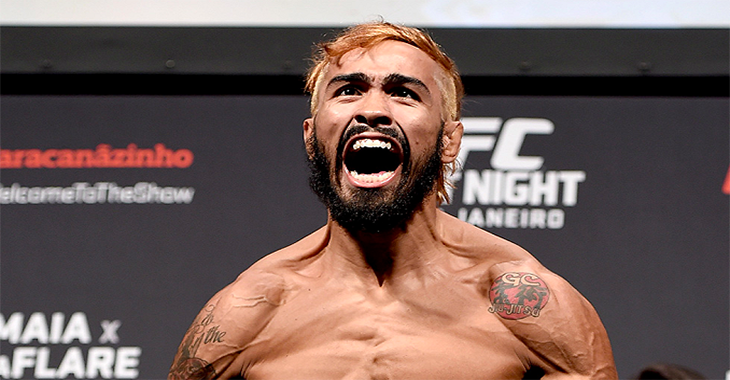 Performance of the Night: Fredy Serrano
Fredy Serrano got the ball rolling on the UFC Fight Pass portion of the preliminaries with a knockout win over Bentley Syler. This victory set the pace for an exciting night of fights.

Performance of the Night: Kevin Souza
Kevin Souza was in the octagon for less than two minutes and earned more than $50,000. He walked into the cage tonight ready to knock his opponent out from the get-go and showed patience waiting for the opportunity to present itself. Katsunori Kikuno shot down for a punch and was caught off guard by Souza’s fist. Kikuno was out before he hit the mat.

Performance of the Night: Gilbert Burns
Gilbert Burns was getting outperformed for two straight rounds and walked into the third ready to end it for the victory. Alex Oliveira’s foot and head movement were superior to Burns’ and it forced Burns into early fatigue. Burns pushed through exhaustion and locked in a late submission to take home the win bonus as well as a Performance of the Night bonus.

Performance of the Night: Godofredo Pepey
That’s about as close to a flying triangle that we’ll see in the octagon for a long time. Andre Fili was doing everything right in attacking Godofredo Pepey and pressing him against the fence, but Pepey was prepared to catch Fili off guard. While getting picked up in the air for a slam, he used the fencing to prop himself into a position to lock in a triangle. It wasn’t long before Fili was forced to submit.