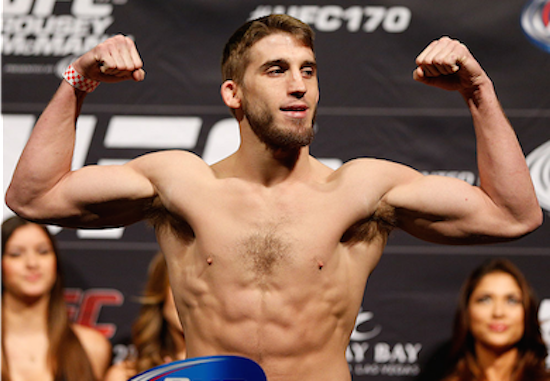 UFC Fight Night 61: Evans vs. Teixeira, which is set to go down February 22nd from Brazil has picked up 3 new bouts.

First up we have Santiago Ponzinibbio vs. Sean Strickland.

Ponzinibbio is 1-1 in his UFC career, and returned to the win column in September when he scored a TKO win over Wendell Oliveira.

His opponent, Sean Strickland is 15-0 in his professional MMA career, and 2-0 under the UFC banner, most recently defeating Luke Barnatt via split decision in a bout many thought should have gone to Barnatt.

Next up we have Ivan Jorge vs. Josh Shockley.

Jorge is an experienced fighter with a 25-4 MMA record that saw him most recently lose to Rodrigo Damm in the beginning of this year.

Shockley on the other hand is 11-3 in his professional MMA career, and dropped his UFC debut again Jason Saggo in June via TKO.

Last but certainly not least we have Wendell Oliveira vs. TJ Waldburger.

Oliveira has yet to pick up a win in his UFC career, going 0-1 since his time on TUF Brazil 2.

His opponent, TJ Waldburger is a UFC vet, going 4-4 in his time with the promotion. He is currently on a 2-fight skid that saw him drop losses to Adlan Amagov and Mike Pyle.

Stay tuned for more updates to this card!