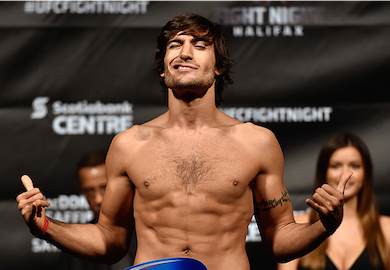 Theodorou started off quickly utilizing some solid footwork to take control of the center of the octagon.

Bruno Santos opened up with some big shots a minute in to round 1, prompting Theodorou to clinch up. Elias landed some solid knees from the clinch position but Santos would dip low and score a takedown. Bruno would use the position to take Theodorou’s back, but the Canadian was able to quickly scramble out of danger and back to his feet. The pair exchanged some big shots to end the first round and actually continued to throw after the bell.

Theodorou increased his volume of strikes to begin round 2. The Canadian pressed Santos back in to the cage and utilized some good clinch work to land some solid knees. When the fighters finally broke from the clinch, Santos quickly shot in and landed a takedown on Theodorou. Bruno would promptly move to back position and began working on a rear-naked choke. Santos’ submission attempts proved unsuccessful however and with 20 seconds remaining in the second round Theodorou got back to his feet. The TUF Nations winner would land a few strikes to close out the round.

Theodorou looked to be the fresher fighter to start round 3, however Santos quickly landed an early takedown and once again took Elias’ back. Theodorou didn’t stay down long and shortly after rising to his feet, he would land a takedown of his own. The TUF Nations middleweight winner would eventually move to mount where he peppered Santos with punches. Theodorou finished the fight strong, once again using some good clinch work to land some effective strikes.

With the win, Theodorou improves to a perfect 10-0 in his MMA career.