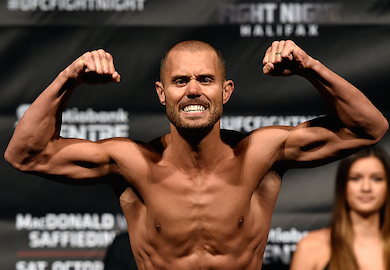 Laprise started off quickly, engaging Cedeno in the clinch position. After the fighters separated, Laprise began stalking Cedeno while landing a couple of solid shots. The constant forward pressure allowed Laprise to score an easy double leg takedown on his opponent. Chad would eventually take Cedeno’s back and began looking for a rear-naked choke submission. Yosdenis scrambled to fight off the submission attempt and was eventually able to get back to his feet. Round 1 would end with both fighters trading leather.

Laprise began round 2 by looking for a single leg takedown. When that didn’t work, the Canadian lightweight began utilizing his jab to back up Cedeno. Once again Laprise would use his stalking style to score a takedown on Cedeno. The TUF Nations winner quickly took the back of his Cuban opponent and proceeded to lock in a body triangle. Laprise would try to soften his opponent up from that position, but Cedeno was able to scramble and ended up in top position. That’s how round 2 would end.

Laprise began round 3 by continuing to back up Cedeno with forward pressure. Chad started to land some solid leg kicks in the early minutes of the final round. Those kicks would eventually translate in to some solid punching opportunities which Laprise quickly capitalized on. Laprise would land a late takedown and finished the fight in top position.

With the win, Chad Laprise remains undefeated in his mixed martial arts career with a perfect 9-0 record.

Stay tuned to bjpenn.com for all the UFC Fight Night 54 results!