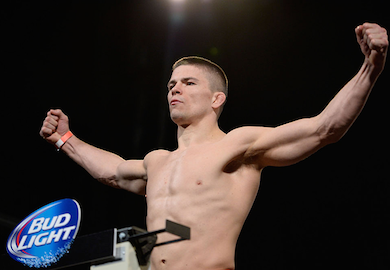 Rick Story was once “The Next Big Thing” in the welterweight division. A loss to Charlie Brenneman in 2011 derailed his fast-track to the title and he was never able to regain his momentum after that.

Gunnar “Gunny” Nelson was experiencing the same amount of attention from fans and media— and it was well deserved. He finished three of his first four opponents inside the octagon and walked into tonight’s bout against Rick Story without a blemish on his record.

“Gunny” would taste defeat for the first time tonight after going five rounds with Story.

Nelson’s poison was in the positioning of his hands. As usual, his hands were kept low and you could tell he felt confident that he’d be able to dodge and slip away from the majority of Story’s punches. This strategy worked for the first couple of rounds but once Story found a comfortable striking distance, it was game over for Nelson.

The first ten minutes were close but Story started to run away with the fight in the third round. He softened Nelson up and then finally dropped him in the fourth. Nelson took a lot of punishment but it never looked like he was in danger of getting knocked out; His chin looked phenomenal tonight.

Nelson tried to lock up a victory in the fifth round by shooting for a takedown, but Story was not going to let the momentum get swept away from him again. This is Rick Story’s second victory in a row.