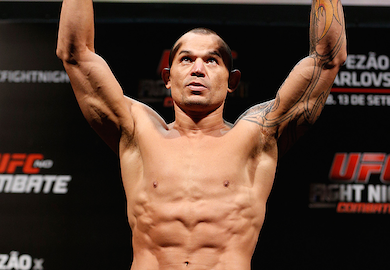 Gleison Tibau proved the bookies right when they slapped him with the label of “favorite” walking into the octagon a -240. Hallmann put up a decent fight, but it was Tibau’s strength and power that gave him the upper-hand tonight.

Tibau opened up the fight with a flurry of powerful shots that would have knocked Hallmann out— had they connected. Hallmann did a good job at blocking the shots and Tibau dumped a lot of his gas tank in that exchange. Tibau relied heavily on superior grappling and positioning to walk out of the fight with his hands raised.

Whenever Hallmann would set up a combination with a landed strike (usually a body kick), Tibau was quick to interrupt and cut him off with a power shot of his own. This would often lead to a grappling exchange where Tibau would press Hallmann up against the fence and bide his time until an opportunity presented itself.