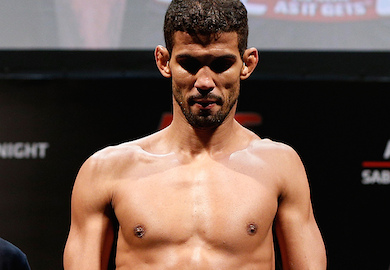 Leonardo Santos remains undefeated in the octagon with a win over Efrain Escudero.

Fighting since 2002, Santos would play the role of the veteran who would test Escudero to see if he truly improved since winning “The Ultimate Fighter Brazil: Season 2”. Escudero is by no means a rookie, but he had much to learn since getting cut by the UFC in 2012.

Escudero started to gain momentum in the second round when he found his range and started to pepper Santos with shots. Santos, showing signs of desperation, would shoot for a takedown and fail often. Escudero locked the round up with a knockdown which he could not capitalize on.

Santos would lock up the win in the third and final round when he gained top control and worked for a submission for the majority of the round. Time expired with Escudero fighting off a rear naked choke and it was not a surprise when Santos’ hand was raised upon hearing the judges’ decision.