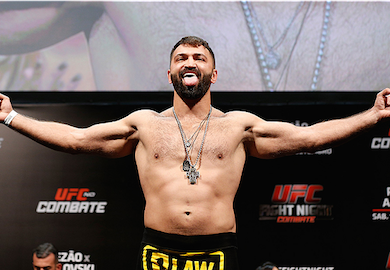 “The Pitbull” Andrei Arlovski is back!

After a short feeling out process, Arlovski threw a right hook that landed in between the hands of “Bigfoot” Silva. Silva fell to his back and it seemed as if he was going to recover, getting ready to put Arlovski in his guard.

Arlovski jumped to the side of Silva and landed six unanswered hammer-fists! The crowd grew more and more silent with each shot that landed and the referee finally jumped in to call it off.

Is Andrei Arlovski a heavyweight contender? Does he have what it takes to go toe-to-toe with Junior dos Santos or Cain Velasquez?

Andrei Arlovski def. Antonio Silva by way of KO (Punches) 2:59 of Round 1