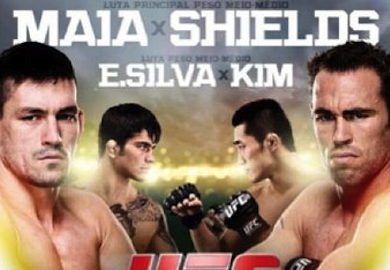 Rousimar Palhares made quick work of Mike Pierce when he submitted him in thirty-one seconds with a heel-hook. This submission would have earned him Submission of the Night, but he did not let go right away and was not awarded the bonus due to unsportsmanlike conduct.

Fight of the Night: T.J. Dillashaw and Raphael Assuncao opened up the main card with a fight that kept everyone on the edge of their seats. The fight displayed active grappling, submission awareness, striking aggression and intelligent counter-striking.

Knockout of the Night: In almost a given, Dong Hyun Kim was awarded Knockout of the Night after his devastating victory over Erick Silva. Silva seemed to be pressing the action by continuously chopping at Kim’s body with knees and it seemed like Kim’s gas tank was running low in the second round. Kim pushed through it and delivered a left hook that sent Silva crashing to the mat, with his eyes rolled in the back of his head. Kim followed up with a hammer fist and that’s all she wrote.

Was it right for Rousimar Palhares to be refused a Submission of the Night bonus? Respond in the comment section below or tweet us your responses!