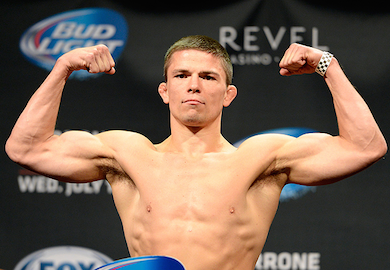 It looks like Rick Story’s transition to “MMA Lab” paid off.

Rick Story was simply too strong for Leonardo Mafra to grapple with. Story had no issues with Mafra throwing up armbar attempts in the first round as there was no way he was going to secure one with the position they were in. Story was intelligent and executed a great ground-and-pound game when there was a low-risk of submission.

It all came to and end in the second round where Story landed his fourth takedown of the fight. He easily transitioned to full mount and set up a head/arm choke perfectly. He transitioned to side control, cranked, and Mafra had no choice but to submit.

Rick Story def. Leonardo Mafra by way of Submission (Head and Arm Choke) 2:12 of Round 2