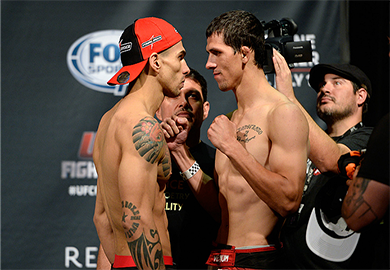 The issue with White’s offense in the first was that he leaned forward with every lunging shot he tried to land. This created an issue because whenever Martins would fire off with a counter hook, White would not only have to step backwards, but he also had to posture up first. This allowed Martins to be successful with his countershots in the opening minute of the fight and many in attendance thought it was going to end before the round was even finished. White adapted, however, and actually started to take control in the second round

Martins seemed a lot slower in the second and his output of strikes decreased by almost 50% from round one. White even knocked Martins down in the second round and it seemed like he was marching his way to victory lane until Martins landed one big shot in the third.

Martins looked to be slowing down, but he had enough power to drill White with a big right hand in round three. After landing a right cross, Martins watched White stiffen up and fall down like he had the carpet pulled from under him.