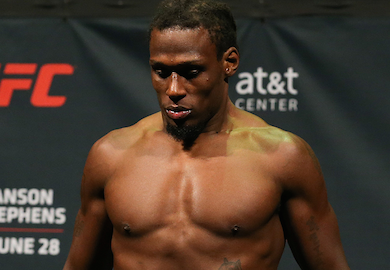 Clint Hester wanted nothing to do with Braga Neto on the ground in the opening round, but it wasn’t long before Hester was fighting off submissions while on his back. Hester showed great resiliency by continuously wall walking back to his feet only to get taken down seconds later. The first round was all Braga Neto and there was no question about it.

The roles seemed to be reversed during round two where Hester started to pick Braga Neto apart. He switched levels well and attacked the body and head. Braga Neto went for a takedown and Hester actually reversed it to where he was on top of Braga Neto. Hester was not a threat at all on the ground as Braga Neto swept him immediately. Hester spent the last minute and a half fighting off submissions while on his back.

Hester started the final round off strong as he once again started to land strikes at will. Braga Neto would take advantage of a mistake Hester would make that through a monkey wrench in the come-from-behind victory Hester was going for. Hester overthrew a strike and slipped to the mat where Braga Neto would hop on top of him and spend a decent amount of time working his opponent down. Hester would make it back to his feet eventually, but the fight was so even that the slip could have caused Hester the bout.

The fight was razor close, but Hester would have his hand raised when all was said and done. He is currently riding a four-fight winning streak and is undefeated in the octagon.