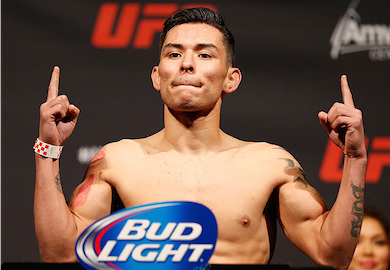 Fight of The Night-Swanson vs. Stephens: In the main event fight, the two featherweights went at it for all five rounds. The fight was a war and eventually it was Cub Swanson who got the decision win. With the win it appears that Swanson will be next in line for the title.

Perfomrnace(s) of The Night- Ray Borg: The UFC flyweight made quick work of Shane Howell. Borg got a quick takedown and eventually used some quick transitions to gain back mount. After that it wasn’t long before Borg locked up the rear naked choke and put Howell to sleep.

Performance(s) of The Night- Carlos Diego Ferreira: Ferreira also locked up a quick submission to win his fight. Going up against Colton Smith, Ferreira was pushed against the cage, but landed a huge judo throw to put Smith down. Smith gave up his back and right away Ferreira locked up a no hooks rear naked choke, forcing Smith to tap.