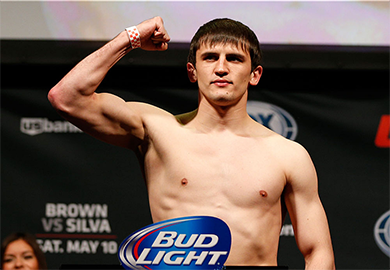 Albert Tumenov knew walking into the octagon tonight that his left hook is a dangerous weapon. Anthony Lapsley figured it out the hard way, though.

This fight was billed as a classic ‘Grappler vs. Striker’ bout. Tumenov played a smart fight and kept his distance which prevented Lapsley from shooting for a takedown. Tumenov timed his hooks beautifully as he dropped Lapsley twice in the first round.

Tumenov’s second hook was the knockout blow that sealed the deal. The referee jumped in the middle of the action and waved the fight off with just over a minute remaining in the first round. Albert Tumenov brought the crowd to life with the first fight of the night.

Albert Tumenov def. Anthony Lapsley by way of KO (Punch) 3:56 of Round 1