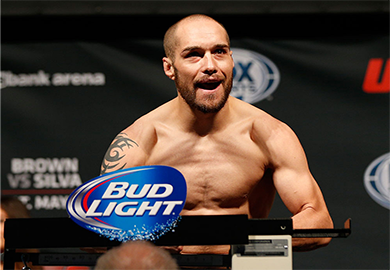 Justin Salas tried to set up takedowns with jabs, but his attempts were transparent and Ben Wall easily defended them. With Salas looking for takedown attempts so often, Wall was unable to attempt anything offensive so it took a while for someone to gain momentum in the first.

Justin Salas gained momentum in the middle of the round, and in a big way. He was able to sneak punches through Wall’s guard and landed uppercuts and jabs throghout the first. While in the clinch, Wall ate a right hook on the ear that messed with his equilibrium and it wobbled him. Salas saw he was hurt, allowed some distance to grow between the two and he popped Wall with a straight that dropped him. Wall was out but recovered quickly. Unlucky for him, Salas jumped on him and followed up with a few big shots. The referee separated the two and stopped the fight.

When Wall came to, he tried to take the referee down thinking it was Justin Salas. Ouch.