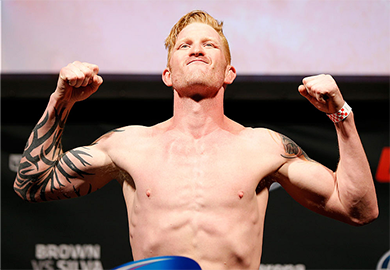 Rafael Natal and Ed Herman put on a back and forth fight that likely had the judges scratching their heads at the end. It was a tough one to score as each fighter had their moments throughout the fifteen minutes.

Rafael Natal did a fantastic job in setting up his takedowns in the first with leg kicks. Ed Herman was flat footed in his approach and either did not want to check the kicks or was just too slow. Either way, he took serious punishment and the kicks looked brutal. Natal worked often for a takedown and tried to get there by pressing Herman up against the fence, but it always seemed to backfire.

Herman would either land a trip takedown while in the clinch or push off Natal and land a series of unanswered strikes. When he wasn’t absorbing leg kicks, Herman was able to land some impressive combinations. There were a couple moments where it looked like Herman was starting to unload on a wobbly Natal, but Natal would recover quickly and even things out with a shot of his own.

Both fighters seemed tired in the third and grappled for superior positioning to lock up a decision win. Natal was bloodied and Herman’s hands hung low throughout the last five minutes and it was clear we were not going to see a finish.