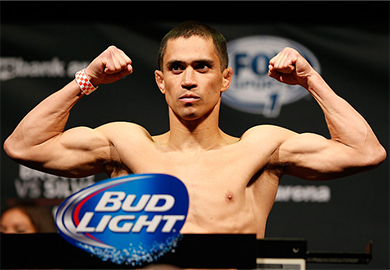 Chris Cariaso and Louis Smolka kicked off the main card with a competitive back and forth fight that went the distance.

The first round did not see too much action take place. Louis Smolka utilized his height while in the clinch by crashing his knees into the gut of Chris Cariaso. Other than that, they were jockeying for position the majority of the round.

Louis Smolka found himself in trouble at the start of the second where he almost ended up in a couple submission attempts. He used great posture to escape and ultimately end up on top of Cariaso. Cariaso constantly worked for submissions but Smolka’s submission defense was on point tonight. Just because his submission defense was great did not mean he fought an intelligent round; he constantly found himself trapped in submissions. It was clear the momentum was changing at the end of the second round when Cariaso cracked him with a three punch combination and Smolka simply shrugged it off. Smolka almost got submitted from a ‘Ninja Choke’ but he was saved by the horn.

Smolka approached the third round as if he was down two rounds to none, so he abandoned grappling technique and tried to pick his opponent apart. It paid off at times, but Cariaso fought too smart for Smolka and ducked some wild strikes that led to takedowns. Cariaso never threatened a submission; he wanted Bruce Buffer to announce him the winner.

The judges awarded Chris Cariaso his second unanimous decision win in a row.