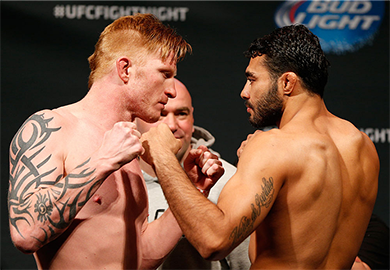 If you can’t make the preliminary card broadcasts or just missed a few bouts, follow along with us here as we break down every blow, every submission, and ever strike, in real-time, right here in this very thread.

Round 1:  Fighters touch gloves. Lapsley shoots in looking for a single leg takedown, fails to get it. Lapsley gets knocked down with a left hook but he gets right back up. Lapsley throws out a lazy right hand that misses. Then shoots in again but fails to get the take down. Tumenov is backing Lapsley up. Tumenov leaps in with a big left hand and lands it. Lapsley cant get his back off of the cage, is still being backed up by Tumenov. Big right hand from Tumenov. Tumenov lands a huge left hook and knocks out Lapsley.

Round 1: No glove touch. Salas lands a body punch. Salas tries to grab the leg for a takedown but fails. Salas gets the clinch again the cage. Wall is able to break away. They clinch again and Salas gets Wall to the ground. Wall has his back on the cage, on his knees. Salas has a hold oh his neck, lets go, they break away. Salas goes for a takedown, fails to get it. Salas shoots in again. they clinch briefly then break. Body kick from Salas. They clinch again, Salas hurts Wall with a right hook then lands a left that drops Wall. Salas moves in and gets the referee stoppage.

Round 1: Fighters touch gloves. Lentz lands a right hand. Lentz lands a combo finishing with a big right hand. Gamuryan throws a huge swooping punch and Lentz ducks it. They clinch and Lents has Gamburyan against the cage. Gamburyan is on his knees with his back to Lentz. Now Lentz grabs the neck, Gamburyan gets to his feet against the cage, Lentz is looking for a takedown. Lentz is landing some knees to the legs of Gamburyan then to the face. Lentz throws a right hand in the clinch that lands to the groin of Gamburyan. Time out. The fight starts back up. Front head kick from Lentz. Gamuryan comes in with a left hand to the body. Lentz gets him on the cage again, looking for a takedown. Lentz starts to land knees. Lentz gets Gamburyan to the ground. He gets to his feet but Lentz is still pushing for a takedown. Lentz is relentless in keeping Gamburyan on the cage. Round ends, 10-9 Lentz.

Round 2: Gamburyan steps back and asks for his hand tape to be cut. After the stop both fighters come out swinging. Gamburyan lands a few huge shots. Lentz with a big body shot. Gamburyan shoots and gets a takedown. He’s in Lentz’s full guard. Lentz looks to get up, and does. Lentz has Gamburyan on the cage. Gamburyan lands some elbows to the head of Lentz. Lentz gets him to the ground, trying to get to the back of Gamuryan. Lentz lands a few knees to the chest of Gamburyan. Lentz  continues to keep Gamburyan on the cage. Gamburyan gets to his feet but Lentz is still on him looking for knees and a takedown, he gets him down again. Gamburyan is unable to shake Lentz off. Lentz keeps landing knees to the body of Gamburyan. Something is bothering Gamburyan’s eye. 10-9 Lentz

Round 3: Gamburyan’s eye is really swollen. Gamburyan throws a huge overhand right that is blocked. Lentz continues to pressure Gamburyan. Has him on the cage again. Lentz gets him to the mat. Gamburyan works for a kimura, Lentz has to roll and try to spin out of it. Gamburyan still has his arm, might be looking for an armbar. Gamburyan lets it go, then gets a sweep that puts him in top position in Lentz’s guard. Shoulder strike from Gamburyan. The referee stands them up. Fighters exchange strikes. Eventually Gamburyan shoots in and gets Lentz against the cage, but Lentz reverses and is on top. Gamburyan’s back is on the cage, Lentz eating elbows from Gamburyan but still looking for a takedown. Lentz lands a few more knees to the body. Fight ends. 10-9 Lentz.

Round 1: Both fighters come out with a lot of feints. Eduardo lands a leg kick. Eduardo looks for a takedown but fails to get it. Wineland throwing out the jabs. Wineland lands a few punches and Eduardo tells him to jeep it coming. Leg kick from Eduardo. Another kick from Eduardo, counter punch from Wineland. Both fighters looking to land counter shots. The jab then leg kick from Wineland. Right hand from Eduardo. Fighters clinch. Then break away. Wineland throws a combo but misses with both punches. Wineland eats a leg kick and tries to come in for a counter. Eduardo lands a right hand that hurts Wineland, then rushes in and lands another right hand that drops Wineland. Fight over.

Round 1: Fighters touch gloves. Cummings moves forward first with a combo that misses. Huge counter shot makes Cabral step back. The fight goes to the ground, right away Cabral looks to lock up a triangle choke. He has it locked up. Cummings is in trouble, Cummings escapes and is on top. Both fighters get to their feet. Cabral pushes Cummings up against the cage. Then he drops for a takedown. Cabral has a body lock, looking to get Cummings down. They briefly go to the mat but get up right away. Cabral gets Cummings down against the cage. Cabral is in half guard, now in mount. Cummings is sitting back against the cage. Now he’s on his back, Cabral in half guard. Cabral moves to mount with seconds left. 10-9 Cabral

Round 3: Leg kick from Cabral. Cabral goes for a head kick, misses, then shoots in but Cummings sprawls again. Cummings now has Cabral on the cage. Cummings lands a few knees to the thigh of Cabral. Spinning elbow from Cabral when they separate. Cabral spins again but Cummings gets a hold of him. They go to the mat and right away Cabral looks for a triangle, then armabr. Cummings gets out. Cabral goes for a knee bar and Cummings counter and gains mount position. Cabral spins, Cummings has the back of Cabral. Cummings looks for a rear naked choke. Lets it go, but still on back mount trying to stretch him out. Cabral shakes him off and gets to side control. Cabral is going to a shoulder lock. It looks locked up, but Cummings spins and gets free, Cabral still in side control. Now half guard, Cummings counters and is on top. Cummings starts to land punches from half guard. The fight ends with Cummings in full guard. Close round, 10-9 Cummings.

Round 2: Natal with a body kick. A good left hook from Herman. They clinch then break away. Herman grabs a kick and lands a straight counter. Leg kick from Herman. Natal returns the favor. Herman lands a left hand. Another leg kick from Herman. Natal ducks for a takedown, but it’s stuffed by Herman. Natal goes for it again and gets it. Natal is in Herman’s full guard. Natal trying to land shots but not doing a lot of damage. The referee stands them up. Leg kick from Herman, shoot in from Natal but it’s stuffed. Natal has Herman on the cage, Herman reverses. Herman lands some short elbows. Knees from both fighters. Natal breaks away. Natal clinches with Herman, has him on the cage. Herman reverses again. Natal reverses, round ends. 10-9 Natal.