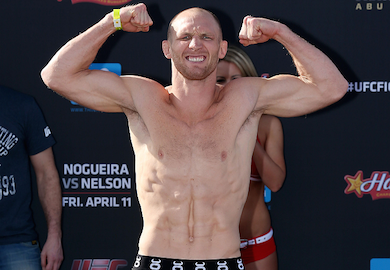 Ryan LaFlare controlled every aspect of the fight in the first round. He kept a safe striking distance which cut off whatever power shots Howard wanted to throw. When he was looking to throw a shot himself, LaFlare was quick to step in and back while landing a shot. He overpowered Howard in the clinch and landed some great shots after separation.

John Howard adapted in between rounds and showed it by clobbering LaFlare with a left hook seconds into round two. Things were looking to be going Howard’s way until LaFlare drove his knee into his groin while in the clinch. It was a brutal shot that sent Howard falling to the mat in pain. It almost looked as if the fight was going to be called off but he got back to his feet and pushed through the pain.

One would assume the knee to the groin would drain whatever energy Howard had left, but he continued to show heart by pressing forward and even landing some brutal shots. LaFlare absorbed them and utilized his takedown skills to neutralize Howard’s power.

The fight went to judges’ decision and they awarded Ryan LaFlare the victory.