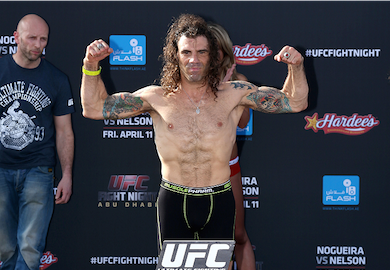 The co main event of the night featured a featherweight bout between UFC veteran Clay Guida and Japanese MMA legend Tatsuya Kawajiri. It was a back and forth fight that saw Clay Guida riding a wave of momentum more than his opponent, but a Kawajiri victory was not far out of the question.

It almost seemed like it was in the opening moments of the first round as Tatsuya Kawajiri was dropped with a wild punch. Kawajiri lost control of his body and almost face planted, but he recovered before Guida could get to him and go for the kill.

Guida was always active, hopping around the octagon which allowed him to land punches from odd angles and land takedowns. While Kawajiri had no answer for most of Guida’s offensive shots, Kawajiri would often counter with moves of his own like submission holds and sweeps. At one point, Kawajiri even slammed Guida on the side of his head.

Kawajiri started to show signs of fatigue in the middle of the second round but pushed through it. Still, him taking deep breaths in comparison to Guida who was always hopping around the octagon like a monkey did not impress the judges.

It was the third round where Guida started to shine. He took advantage of Kawajiri’s draining gas tank and gave him no room to work with. Kawajiri almost locked in a guillotine, but Guida postured up and slammed him to the canvas. That slam marked the last significant move of the fight as Guida rode out a decision victory.

After the fight, Clay Guida stated he wanted to fight up-and-comer Conor McGregor in about he called, ‘Caveman vs. Leprechaun’. Is that something you would want to see? Share your thoughts in the comment section below!