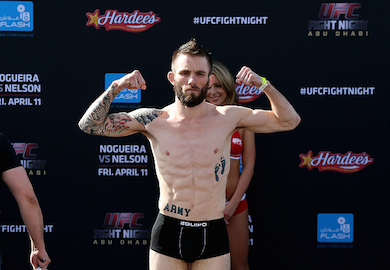 We have only seen thirty-nine seconds of action today and we already ran into some controversy.

Johnny Bedford and Rani Yahya had the honors of kicking off ‘UFC Fight Night 39’ on the UFC Fight Pass Preliminary portion of the card. The fight looked to be picking up with an exciting pace, but an accidental clash of heads caused Rani Yahya to get knocked silly. The referee called a stop to the fight as Yahya had a dazed look on his face and he was not able to defend himself.

Johnny Bedford proceeded to celebrate up until the announcer declared the bout a ‘No Contest’. Bedford was enraged and claimed he won the fight because Yahya was knocked out. ‘I got headbutted too, I have a cut on my forehead,’ Bedford claimed. The two had a shouting match in the middle of the octagon during the post fight interview and were separated by officials.

Expect to see a heated rematch from these two.

Johnny Bedford and Rani Yahya battled to a No-Contest :39 of Round 1