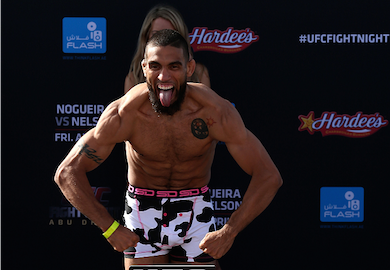 Alan Omer and Jim Alers both made their octagon debuts tonight and looked to be in fantastic shape. They showed incredible technique and heart throughout their fight. With a combined record of 30 wins and only 4 losses, it was easy to see why they created so much buzz outside of the UFC.

Omer and Alers showed no signs of octagon jitters in their debut tonight. The first round was extremely even and showed that both men have great striking technique. It was rare to see either man drop his hands and fight unintelligently. Jim Alers was knocked down in the opening moments of the second round but quickly rebounded and evened the scorecards by knocking Alan Omer down a couple minutes later.

Jim Alers relied on his takedowns to win ‘points’ for the third round. He took Alan Omer down twice and stayed busy long enough to not get stood up. With no submission losses to his name, Alers felt confident enough that he would not walk into a hold from the BJJ purple belt.

Jim Alers won the fight by way of Split Decision was proceeded to call out Conor McGregor.