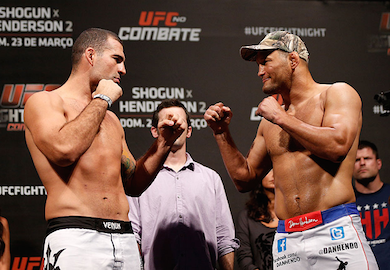 As part of our live fight night coverage, BJPENN.COM, invites fight fans to join us for our main card play-by-play and live results on tonight’s UFC event in Brazil.

If you do not have Fox Sports 1 or cannot make tonight’s card, join us here for all your blow-by-blow and round-by-round updates.

Round 1 – Siler starts with a leg kick and body kick. Jason lands two good punches. Siler misses with a leg kick. Front kick from Siler. Jason lands a huge right hand that rocks Siler! Siler stumbles back, Jason moves in and lands a left hook. Siler falls back to the mat, the referee steps in and stops it.

Round 1 – Santos with a huge leg kick. Missed head kick from Parke. Another big leg kick from Santos. And another. Santos comes in with a upper cut, then clinches. Fighters break. Referee calls time. Looks like a poke in the eye of Parke. Good body kick from Santos. Santos lands with a counter uppercut. Parke gets Santos against the cage, then they break apart. Parke’s left eye already looks like it’s swelling. Parke again gets Santos on the cage. Referee separates them. Parke eats another body kick. Santos goes for the takedown, it’s stuffed. Parke has Santos on the cage. Parke’s not doing a lot when in the clinch on the cage. The referee separates them again. Head kick from Parke. Santos lands a good right hand. Fighters clinch. Parke goes for a single leg takedown, the round ends. Close round, Parke 10-9.

ROUND 2- Leg kick from Parke. Throws out a jab. Santos lands a left uppercut. Fighters exchange, then clinch. Parke has Santos against the cage. Parke is landing knees to the legs. Referee breaks them apart. Santos shoots for a takedown, misses it. Parke shrugs it off and has Santos on the cage again. Parke looks for a single leg. The referee calls time, takes a point from Parke for grabbing the shorts. Missed head kick from Parke. Head kick from Santos. Parke pushes Santos to the cage. Parke has Santos on the cage, but is failing to do anything offensive. Fighters separate. The both throw punches, then clinch again. Parke lands a good elbow. Parke lands a few uppercuts while clinched against the cage. Parke gets the back while standing, lands some leg strikes. Another close round, because of the point deduction it might be 9-9.

ROUND 3- Both fighters come out swinging. Parke really trying to push the pace. They clinch against the cage, with Parke in control. Parke trying to land short punches in the clinch. Santos reverses, but then gets reversed. Both fighters are working to gain control in the clinch. The referee splits them up and Parke goes right back to the clinch. Parke is just smothering Santos with his clinch game. Parke is trying for a takedown, but is not finding any success. They are separated again. Parke lands with a right hand. Santos fakes a takedown, and now it’s back against the cage in the clinch. Parke seems content with pushing Santos against the cage for the rest of the fight. Parke gets a brief takedown at the end of the fight. 10-9 Parke

Round 1 – Ferreira lands a few punches, Dollaway lands a good right hand. Ferreira pushes forward, backs Dollaway towards the fence. Ferreira is throwing huge punches, Dollaway counters with a right, left, right combo. Ferreira drops and Dollaway goes in and pounds on Ferreira until the referee stops the fight.

Result: Dollaway wins via TKO at :39 of Round one.

ROUND 2- Shogun lands a punch. Shogun throws a punch that lands behind the ear of Henderson. Shogun has Henderson clinched against the cage.  Fighters break apart. Jab from Shogun. Fighters exchange, Henderson lands a punch and Shogun counters with a body kick. Henderson attempts a takedown, fails to get it. Shogun lands a huge uppercut, gets Henderson to the ground.Shogun working in full guard. Shogun trying to land from guard, Henderson doing a good job of keeping Shogun in tight. Referee stands them up. Shogun with a jab. Body kick. Another strong round for Shogun, 10-9.

Result: Henderson wins via Knockout at 1:31 of Round Three