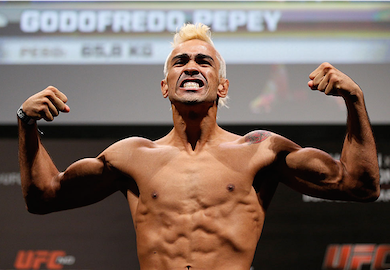 Even though we are only one fight into today’s card, we may have already seen the Knockout of the Night.

The crowd in Brazil was electric before the first fight even started. Godofredo ‘Pepey’ Castro and Noad Lahat were walking into the cage with a lot of hype around them and they had the platform of UFC Fight Pass to showcase their skills.

Despite being a great grappler, Lahat was not shying away from the striking game one bit. He lunged forward and popped his opponent with jabs, but it did not take long for Pepey to find a comfortable striking distance and land a lethal knockout blow.

Pepey was controlling where the fight was going and started backing Lahat up against the cage where he threw a beautiful flying knee. The knee landed flush and Lahat was out cold before he even hit the canvas.