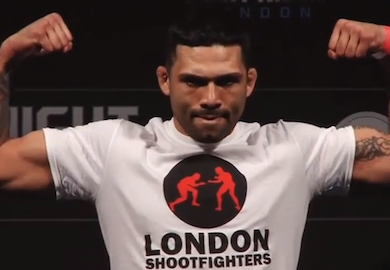 Clauido (pictured) came out extremely aggressive. He threw out wild strikes and looked to drag the fight to the ground as soon as possible. Brad Scott did a good job of keeping the fight on the feet, where his more technical striking proved troublesome for Silva, but still managed to get taken down a few times.

By the end of the second round Silva seemed gassed. The fight was stopped twice because of eye pokes, both suffered by Scott. After the second stoppage (in the third round), Silva managed to get to Scott’s back. Eventually he lost the position, but ended up on top in half guard. Silva finished the fight in top position on the ground.

The fight went the distance.